Debian is the preferred choice of an operating system for all our IT Solutions for Small Business and Home users.

Debian is a free operating system (OS) for your computer. An operating system is the set of basic programs and utilities that make your computer run. Debian provides more than a pure OS: it comes with over 59000 packages, precompiled software bundled up in a nice format for easy installation on your machine. Read more about Debian ...

Debian is under continual development. The latest release is Debian 10.3. It is also (currently) known as stable or by its codename "Buster". Each version also corresponds to a set of named software repositories (at least one per CPU architecture).

At any given time, there is one stable release of Debian, which has the support of the Debian security team. When a new stable version is released, the security team will usually cover the previous version for a year or so, while they also cover the new/current version. Only stable is recommended for production use.

There are also two main development repositories unstable and testing which are continually updated during the development of the next stable release. The latest packages arrive in unstable (which always has the codename "Sid"). Packages are automatically copied from unstable to testing when they meet criteria such as lack of release-critical bugs, and dependencies being satisfied by other packages in testing.

Debian Long Term Support (LTS) is a project to extend the lifetime of all Debian stable releases to (at least) 5 years. Debian LTS is not handled by the Debian security team, but by a separate group of volunteers and companies interested in making it a success.

Servers are working around the clock doing their job as expected. But like any machine they do require some attention and maintenance to prevent server disastrous failures and data loss. An important part of the server maintenance is server monitoring performed by system administrators to ensure that the server is performing as expected and all problems are discovered and solved before they become serious.

Server monitoring can be done using either manual techniques or automated server monitoring software tools. Even if you are responsible for only 1 server, you will very soon realise that you need a monitoring tool. Yes, we humans need some healthy night sleep.

Our server monitoring tool of choice is the MONIT ( https://mmonit.com/monit/ ). Monit is a small Open Source utility for managing and monitoring Unix systems. Monit conducts automatic maintenance and repair and can execute meaningful causal actions in error situations.

That's what is exciting about Monit. Monit is more than just a passive monitoring tool. Suppose in the middle of the night apache is using too much resources (e.g. if a DoS attack is in progress) Monit can stop or restart apache and send you an alert message. 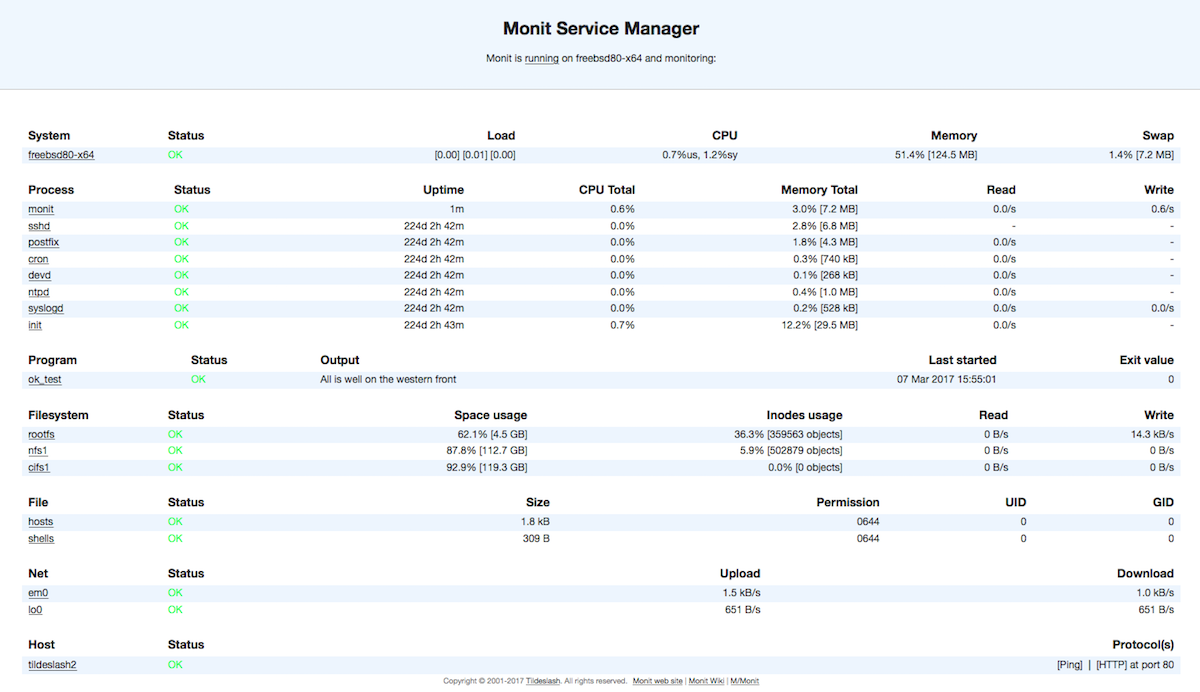 Monit can logging status and error messages to a file or via syslog. We are using dedicated Monit log file in our Debian based systems ( /var/log/monit.log ).

If an event occurs Monit will raise an alert. By default, Monit only sends alert notifications via email. Additionally, a script can be added to send alerts using other means. In our solutions we are using a customised Monit2Telegram script to send Monit alerts to Telegram messenger using a Telegram bot.